A small professional development project on reading and critical thinking began in Romania in early 1996 as an initiative of the International Literacy Association and the Romanian Soros Foundation. Later that year, the project joined forces with the USAID-funded Orava Project in Slovakia and took the name Reading and Writing for Critical Thinking, as a “network program” of the Open Society Institute.

In a four-country assessment of RWCT trained in vs. control groups in Central Europe and Central Asia conducted by the American Institutes of Research, RWCT teachers showed sustained use of the methods three years after they participated in workshops. Their students performed significantly better on critical thinking tasks. 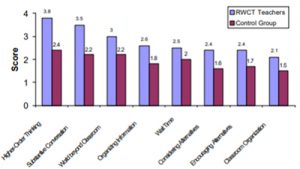 RWCT teachers were observed to promote more higher-order thinking skills, substantive conversation, and interest in the world outside the classroom than teachers in control groups; RWCT teachers were also more likely than their peers to organize classroom information to promote discussion and critical thinking, encourage pupils to consider multiple answers to problems, and wait for pupils answer questions.